Give a missed call at

Bangalore vs Hyderabad: Battle of the South in the Indian T20 League

In this fierce battle between the two Southern teams, Hyderabad have the edge over Bangalore. On one side, there is Bangalore’s poster boy Virat Kohli and on the other, there is Hyderabad’s fan-favorite David Warner. Ab de Villiers vs Rashid Khan, Kane Williamson vs Bhuvneshwar Kumar, the list goes on.

With both teams boasting a number of best international players, there have been some memorable games played between the two teams in the Indian T20 League, the most exciting one being the final of the 2016 edition.

Bangalore and Hyderabad have been involved in some thrilling matches over the years. No one side has dominated the rivalry, with wins and losses coming almost alternatively. 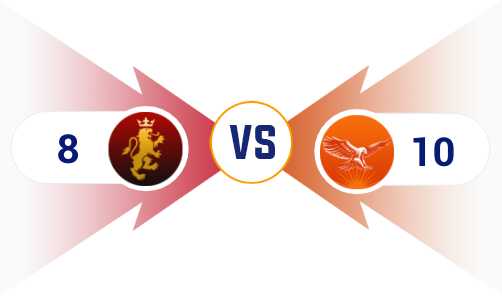 Bangalore and Hyderabad have squared off 2 times in the play-offs, once in the final of the 2016 edition and once again in the eliminator in 2020. On both occasions, Hyderabad emerged victorious.

Bangalore have added a number of exciting players to their squad this year, including big hitter Glenn Maxwell. Sri Lanka’s Wanindu Hasaranga and Dushmantha Chameera and Singapore’s Tim David have been roped in as replacements for the unavailable players. Here are a few key players who can play an important role for the Bangalore team in the 2021 season.

With both teams studded with superstars, it is worth watching whenever Hyderabad and Bangalore lock horns with each other. The Bangalore vs Hyderabad stats provided here will help you select players who could be expected to fetch you the highest fantasy points in the upcoming clash.

How many times have Hyderabad and Bangalore won the Indian T20 League?

What is the track record of Bangalore and Hyderabad at the Sheikh Zayed Stadium?

Bangalore have played 5 matches at this venue and won only 2. Hyderabad, too, have a poor track record here. They have played 4 matches at Abu Dhabi and emerged victorious just once.

Who scored the most runs for Hyderabad and Bangalore in the first leg of the 2021 season?

For Bangalore, Glenn Maxwell scored 223 runs in seven matches, while Jonny Bairstow is the top run scorer for Hyderabad with 248 runs in the same number of matches. However, Bairstow is not available for the second leg of this year’s tournament.

Which new players can make the most impact for Bangalore and Hyderabad?

Wanindu Hasaranga is one of the important overseas replacements for Bangalore. He has been influential for Sri Lanka with both bat and ball in T20Is. For Hyderabad, Sherfane Rutehrford, brought as Bairstow’s replacement can be a key player in the middle order.