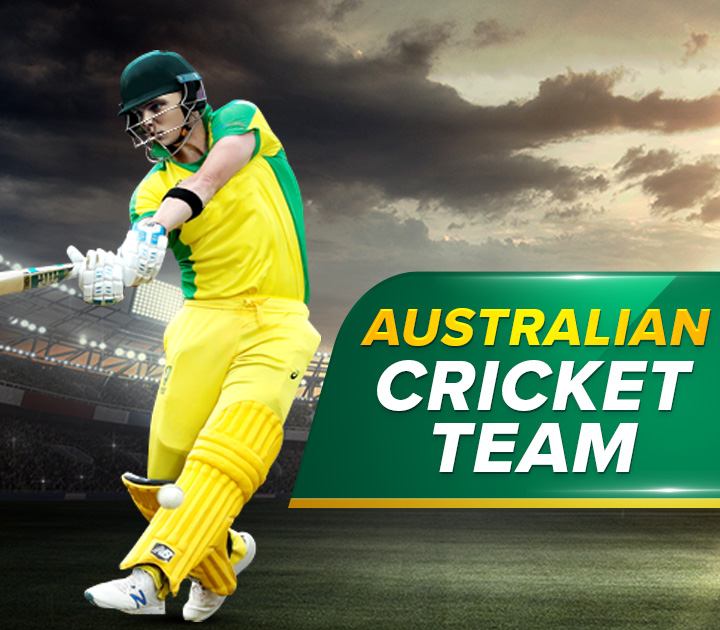 The Australia men's national cricket team represents Australia in men's international cricket. As the joint-oldest team in Test cricket that played their first-ever Test match in 1877, the team also plays One Day International (ODI) and Twenty20 International (T20I) cricket. The team participated in both the first ODI, against England in the 1970–71 season, and the first T20I, against New Zealand in the 2004–05 season. It is the most successful team in Test cricket history in terms of overall wins, win-loss ratio and the win percentage.

Australia is the most successful team in ODI cricket history too, winning more than 60% of their matches. They have made a record seven World Cup final appearances and have won the biggest ODI tournament a record five times: 1987, 1999, 2003, 2007 and 2015.

The Australian cricket team has rivalries with other Test-playing nations, most notably with England, their opponent in the famous Ashes series. The rivalries with India, South Africa and New Zealand have also gained prominence in recent times. As on 1 Dec. 2020, Australia is ranked first in Tests, fourth in ODIs and second in T20Is rankings. Tim Paine is the current Test captain while Aaron Finch is the ODI and T20I captain of the team.

Early Years and the Birth of the Ashes

The Australian cricket team participated in the first Test match at the MCG in 1877, defeating England by 45 runs. Charles Bannerman made the first-ever Test century. Test cricket was played only between Australia and England until 1889. Despite Australia's much smaller population, the team was very competitive in its early games.

A highlight of Australia's early history was the 1882 Test match against England at The Oval. In this match, Fred Spofforth took 7wickets for 44 runs in the fourth innings to save the match by preventing England from achieving their 85-run target. After this match The Sporting Times, a major newspaper in London at the time, printed a mock obituary in which the death of English cricket was proclaimed and the announcement made that "the body was cremated and the ashes were taken to Australia." This was the start of the famous Ashes series. To this day, this contest is one of the fiercest rivalries in sport.

The country produced many outstanding batsmen who led Australia to become the dominant cricketing nation in its early years in the sport. The 1930 Ashes tour in England brought a new age of success for the Australian team. The team, led by Bill Woodfull, including some legends of the game, as well as a young boy named Don Bradman. Bradman was the outstanding batsman of the series, scoring a record 974 runs including one century, two double centuries and one triple century, which was a massive score of 334.

The 1932–33 England tour of Australia is considered one of the most infamous episodes of cricket and is referred to as ‘The Bodyline Series.’ The tactic, although effective, was widely considered by Australian crowds as vicious and unsporting. Injuries to Bill Woodfull and Bert Oldfield (the latter had his skull fractured) worsened the situation. The series ended in a 4–1 win for England but the bodyline tactics used were banned the year after.

Sir Donald Bradman is widely considered the greatest batsman of all time. He dominated the sport from 1930 until his retirement in 1948, setting new records for the highest score in a Test innings (334 vs. England at Headingley in 1930), the most career runs (6996), the most centuries (29), the most double centuries and the highest Test and first-class batting averages. His record for the highest Test batting average – 99.94 – has never been beaten. He would have finished with an average of over 100 runs per innings if he had scored just 4 runs in the last Test innings of his career but he was dismissed for a duck in that. He was knighted in 1949 for his services to cricket. He is generally considered one of Australia's greatest sporting heroes.

Australia played their first Test against New Zealand in the 1945–46 season. They were by far the most successful team of the 1940s, being undefeated throughout the decade, winning two Ashes series against England and their first Test series against India. The team that Don Bradman led against England in 1948 gained the moniker The Invincibles after going through the tour without losing a single game. They won the five-match Test series 4–0, with one draw. The tour was particularly notable for the fourth Test of the series, in which Australia won by seven wickets chasing a target of 404, setting a new record for the highest run chase in Test cricket. The tour is also remembered for the final Test in the series, Bradman's last, where he finished with a duck in his last innings after needing only four runs to secure a career average of 100.

Australia were less successful in the 1950s, losing three consecutive Ashes series to England, including a horrendous 1956 tour of England. Jimmy Laker took 19 wickets in a Test, including all ten wickets in one innings, a game dubbed Laker's Match.

However, the team rebounded to win five consecutive series in the latter half of the 1950s. The series against the West Indies in the 1960–61 season was notable for the first-ever tied Test, at the Gabba. Richie Benaud captained Australia in 28 Tests, including 24 without defeat during that time. Alan Davidson, who was a notable fast-bowler, became the first player to take 10 wickets and make 100 runs in the same Test match.

The Centenary Test was played in March 1977 to celebrate the 100th anniversary of the first-ever Test played. Australia won the match by 45 runs, a result identical to that of the first Test match.

In May 1977, Kerry Packer announced he was organizing a breakaway competition – the World Series Cricket (WSC) – after the Australian Cricket Board (ACB) refused to accept Channel Nine's bid to gain exclusive television rights to Australia's Test matches in 1976. Packer secretly signed leading international cricketers to his competition, including 28 Australians. Almost all the members of the Australian Test team at the time were signed to the WSC and the Australian selectors were forced to pick what was generally considered a third-rate team. Australia lost the 1978–79 Ashes series 5–1, the team's worst Ashes result in Australia. The WSC players returned to the team for the 1979–80 season after a settlement between the ACB and Kerry Packer. Greg Chappell was reinstated as captain of the Australian team.

The infamous underarm bowling incident of 1981 occurred when, in an ODI against New Zealand, Greg Chappell instructed his brother Trevor to bowl an underarm delivery, with New Zealand needing a six to tie off the last ball. The aftermath of the incident soured relations between Australia and New Zealand, with people calling it "unsportsmanlike" and "not in the spirit of cricket."

The 1980s were a period of relative mediocrity after the turmoil caused by the rebel tours of South Africa and the subsequent retirement of several key players. Many players were handed three-year suspensions by the Australian Cricket Board, which greatly weakened the player pool for the national side, as most of the suspended players were current representative players or on the verge of gaining honours.

The golden era of Australian cricket occurred around the end of the 20th century and the beginning of the 21st century. Australian cricket recovered from the disruption caused by the World Series Cricket to create arguably the strongest Test team in history.

Under the captaincy of Allan Border, the team was gradually built from cricketing stocks. Some of the rebel players returned to the national side after serving their suspensions. During these lean years, it was the batsmen Border, David Boon, Dean Jones, young Steve Waugh and the bowlers Craig McDermott and Merv Hughes, among others, who kept the Australian side afloat.

With the emergence of players such as Ian Healy, Mark Taylor, Geoff Marsh, and Mark Waugh in the late 1980s, Australia continued its rise in world cricket. Border was instrumental in guiding a young Australian team to World Cup glory in 1987. With the retirement of the champion but defensive player Allan Border, a new era of attacking cricket began under the leadership of Mark Taylor and then Steve Waugh.

The 1990s and 2000s were arguably Australia's most successful periods as they remained unbeaten in all the Ashes series played during this period except the famous 2005 series, and achieved a hat-trick of World Cup wins. This success has been attributed to the restructuring of the team and system by Border, successive aggressive captains, and the effectiveness of several key players like Glenn McGrath, Shane Warne, Justin Langer, Matthew Hayden, Adam Gilchrist, Michael Hussey and Ricky Ponting.

Following the 2006–07 Ashes series, which Australia won 5-0, several key players like McGrath, Langer and Warne retired from Test cricket. Australia slipped down the Test rankings after that. In March 2014, Australia beat South Africa, the number 1 team in the world, 2–1 and overtook them to return to the top of the rankings. In 2015, Australia won the World Cup for a record fifth time, under the leadership of Michael Clarke. They lost just one game in the whole tournament. Emergence of players such as David Warner, Steve Smith and Pat Cummins has made Australia one of the strongest teams today.

On 25 March 2018, during the third Test match against South Africa, Australian players Cameron Bancroft, Steve Smith, David Warner and the leadership group of the team were implicated in a ball-tampering scandal. Smith and Bancroft admitted to trying to alter the condition of the ball by rubbing it with sandpaper. Smith stated that the purpose was to gain an advantage by unlawfully changing the ball's surface in order to generate reverse swing.

Steve Smith and David Warner stood down as captain and vice captain respectively during the third Test while head coach, Darren Lehmann, resigned from his position after the series. Smith and Warner were both stripped of their captaincy roles and sent home from the tour (along with Bancroft). Cricket Australia then suspended Smith and Warner from playing for 12 months and Bancroft for 9 months. Smith and Bancroft were banned from leadership roles for 12 months from their return after the suspension, while Warner was banned from leadership of any Cricket Australia team for life.

Here are a few things that most people do not know about the Australian cricket team. Some of these might astonish even cricket-crazy fans.

Check out all about the biggest international series and cricket tours of the Australian cricket team here.

Now that you know well about your favourite team, you can join it in the live action. The team plays on the ground and you play on Howzat, India’s best fantasy cricket app. With your good knowledge of the team, its past records, the best players and many more things, you can make informed choices and maximize your chances of winning. So what are you waiting for? Download India’s most trusted fantasy cricket app fantasy cricket app and select your own team now.

Most Test Runs for Australia

Most Test Wickets for Australia

Most ODI Runs for Australia

Most ODI Wickets for Australia

Most T20I Runs for Australia

Most T20I Wickets for Australia